Calling all Sonics coaches! We’re prepared to kick off the 2016 season with our annual coaches meeting to be held on Saturday, February 6 at 10:00 AM at Hearne Elementary, 13939 Rio Bonito, Houston 77083. Please make every effort to attend this important meeting.

Coach David Hebert was introduced to the Sonics in 2004 when his daughters, Utopia and Aubrionna, were 11 and 7 years old, respectively. At one of Utopia’s first Sonics practices in Stafford, the uninspired soon-to-be coach attempted to take a nap on the high jump pit. Utopia ran up to him to say, “Dad, you are embarrassing me! No other parents are taking naps. Please get up!” So he got up to appease his oldest child. 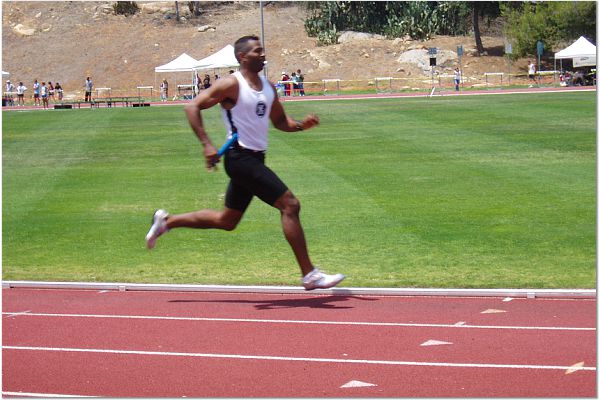 “Education and exercise are life-long commitments. As long as you have the freedom to think and move, it is never too late to finish what you started.” –David Hebert

Later in the season, the 240-pound coach watched the parent-coaches relay at the South-Belt meet in Pasadena. Seeing other men his age running was an inspiration. Upon joining the coaching staff the following year, he had met enough other Sonics coaches (Ernest Bell, Barry Minter, Brian Edwards) to assemble a parent-coaches relay team for the Sonics. (By the way, we could still have one. But Coach Goldy and Coach Melvin don’t seem to want to run any longer. But that’s another story.)

Anyway, the following year, coach David found an email declaring that his employer, GE, had a corporate relay team that had held a 9-year National Championship winning streak. In the effort to make the team, Coach David lost 35 pounds to qualify for the 2006 team. GE won again, and haven’t lost since.

In 2013, Coach David has once again qualified for the GE Runners team, in preparation to defend their 16-year unbeaten streak. Coach David will be running the 600-meter leg of the Senior’s Relay.

For more information on the US Corporate Athletics Association, go to: http://uscaa.org/

Saturday, January 26 at 4:00 PM, the Sonics will hold their annual coaches meeting to plan for the upcoming 2013 season. The meeting will be held at the home of Kenneth and Camille Jackson and all Sonics coaches are encouraged to attend. Please contact Kenneth (281-788-7346) or Camille (713-446-8424) for the address or other relevant information.

I want to thank all of our athletes, parents, coaches and volunteers who helped make the 18th Annual Sonics’ Relays a success. We would also like to thank all of the track clubs who supported our meet… and who provided exceptional competition for all to enjoy.