The final day of Junior Olympics competition saw only a few Sonics compete, but they represented us well. The morning began with Natalie Garcia’s 17th place finish in the 17-18 Women’s 3000 meter run. Then we really ended on a high note with our two 13-14 Boys relay teams each bringing home medals with 4th place finishes in the 4×100 and 4×400 events. The 4×100 team consisted of Kealon Stephens, Donye Lake, Todd Woods, and Mwey Robinson, while the 4×400 team was made up of Mwey Robinson, Donye Lake, Kenneth Jones, and Todd Woods.

In total, the Sonics earned medals in five events competing in one of the largest and most competitive Junior Olympics to date. Congratulations to everyone who was part of this great showing!

The Sonics bounced back strong today with two of our girls making the medal stand in the discus throw. Amira Chatman took 7th place in the 15-16 Girls division while first-time Junior Olympics participant, Tirea Reed, claimed 5th place with a personal best throw of 94 feet even.

Friday closed with the 400 meter event which saw Tiras Reed in the 15-16 Boys division and Deanthony Nervis in the 17-18 Men’s division. Despite posting some of their best times, neither was able to advance to Saturday’s finals.

This was the lightest day so far for Sonics action as we only had athletes competing in four different events. Jaiden Anderson started things off in the 15-16 Girls discus throw, followed by Zachary Smith setting a personal best in the 9 Boys 1500 meter run. Deanthony Nervis raced in the semi-finals of the 17-18 Men’s 200 meter dash, but failed to qualify for the final. But the big highlight was our 13-14 Boys 4×400 relay team clocking the fourth fastest time in the preliminary round, earning them a spot in Saturday’s final. The team of Mwey Robinson, Donye Lake, Kenneth Jones, and Todd Woods knocked two seconds off their season best time set in the regional qualifier meet.

The third day of action for the Sonics saw personal best performances from Edward Bocock in the 13 Boys 100 meter hurdles and Kenneth Burgess in the 15-16 Boys discus throw. Our other hurdlers competing today, Jill Kaiser, Jayla Cooper, and Zamari Bruce, all turned in solid performances. Tirea Reed competed in the 13 Girls shot put, Ashston Hartwell in the 17-18 Men’s high jump and triple jump events, and Deanthony Nervis ran in the semi-finals of the 17-18 Men’s 200 meter dash. Unfortunately, none of our athletes were able to advance to finals or reach the medal stand.

Our 11-12 Girls 4×400 team of Jill Kaiser, Jordan Smith, Eden Fuller, and Kylah Woods were unable to race as this event ended up being rescheduled for Thursday.

There were no Sonics medalists today, but still some valiant performances. Deanthony Nervis advanced to the semi-final round of the 17-18 Men’s 100 meter dash by posting the 8th fastest time overall. Kenneth Jones and Anthony Chatman recorded personal bests in the 1500 meter run and discus throw, respectively. Also, competing were Natalie Garcia in the 1500 meter run; Avia Jones, Donye Lake, and Kealon Stephens in the 100 meter dash; Tizekiel Reed and Kenneth Burgess in the shot put.

The highlight of the day’s competition was provided by Anthony “AJ” Chatman who claimed the Sonics first medal of the JO with his 7th place finish in the 14 Boys shot put with a toss of 46′ 2.5″. 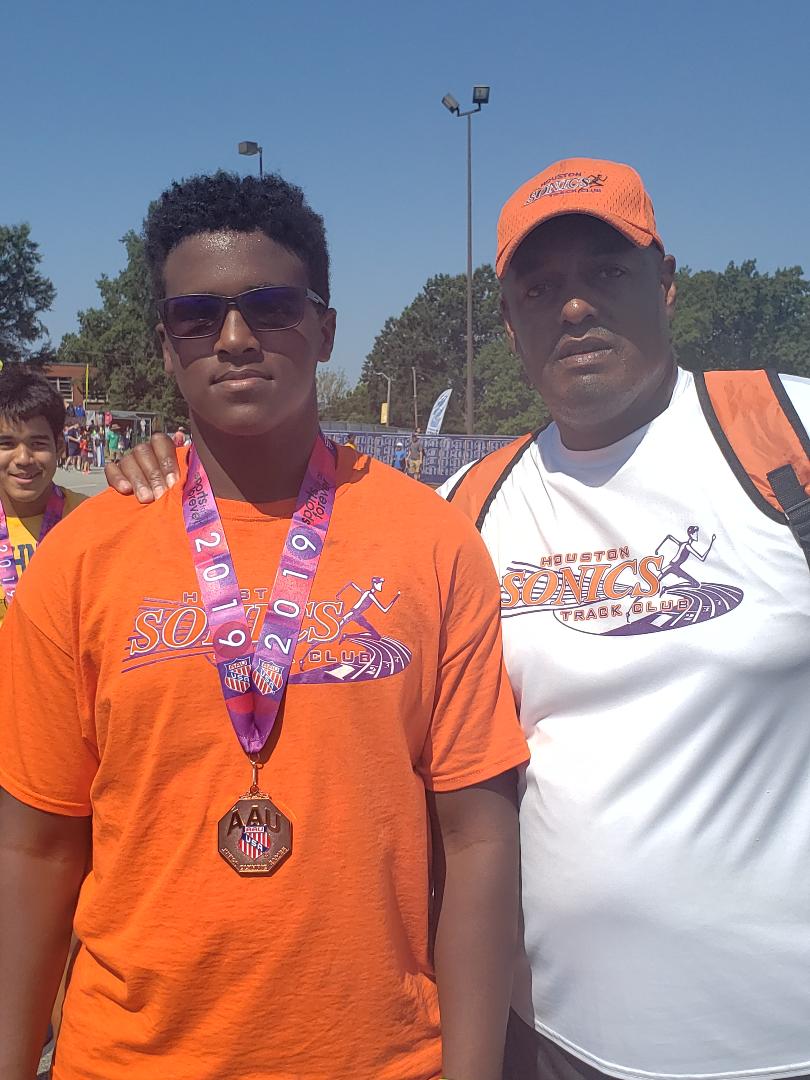 Deanthony Nervis advanced from the preliminary round of the 17-18 Men 200 meter dash with the 8th fastest time of the day of 21.67. Kelsey Turney had a strong showing in the 11 Girls discus throw, narrowly missing the medal stand with her 10th place finish and a personal best of 62′ 1″.