The Sonics only had three competitions on Saturday, but they made the most of it by going three-for-three in the medals. Anthony Chatman got things started off right for the Sonics with his 8th place finish in the 11 Boys Discus. The 9-10 Girls 4×100 relay followed it up with their 8th place finish in the finals. And capping things off in big way was Octavia Gee who not only won the 10 Girls Turbo Javelin, but set a new national record in the process with a toss of 86′ 8″. This brings the Sonics’ medal total for the Junior Olympics to EIGHT! This is a remarkable accomplishment considering we had our smallest team in years. Congratulations to everyone for their hard work and determination! 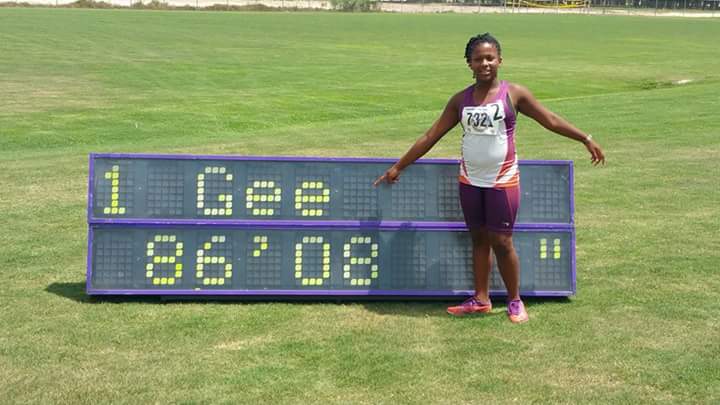 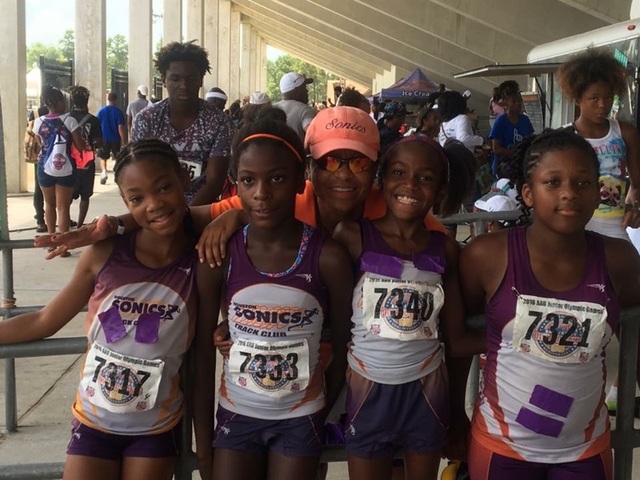 Sonics medal #5 came early in the day with Damario Gee‘s 4th place finish in the 11 Boys Turbo Javelin. Anthony Chatman, competing in the same event, had a strong 13th place finish with a PR throw of his own. In the 4×100 relays, the 9-10 girls, Olivia Nicholas, Kylah Woods, Jayla Cooper, and Octavia Gee recorded the fifth fastest time in their division thus securing their spot in the finals on Saturday. The Sonics 8-under girls, 11-12 girls and 13-14 girls teams also competed, but failed to advance. Closing out the day were Amira Chatman whose PR performance in the 13 Girls Discus put her in 11th place and Jayla Cooper in the 10 Girls Long Jump and Aubrionna Hebert in the 17-18 Women’s Javelin.

Today was a relatively quiet day for the Sonics. It started off with 1500 meter PR performances from Angela Mayer and Amelia Olowu in the 8-under Girls and 9 Girls divisions, respectively. Connor Parker then posted a top 15 finish in the 9 Boys 1500 meters. Siyon Rogers had a huge PR in the 9 Boys Turbo Javelin, beating his previous best by nearly 20 feet! The day was wrapped up with 13-14 Girls 4×400 Relay who failed to advance to the finals. On Friday, the Sonics will be looking to contend in four relay events, five field events, and Cesley Williams in the 13 Girls 400 meter dash. 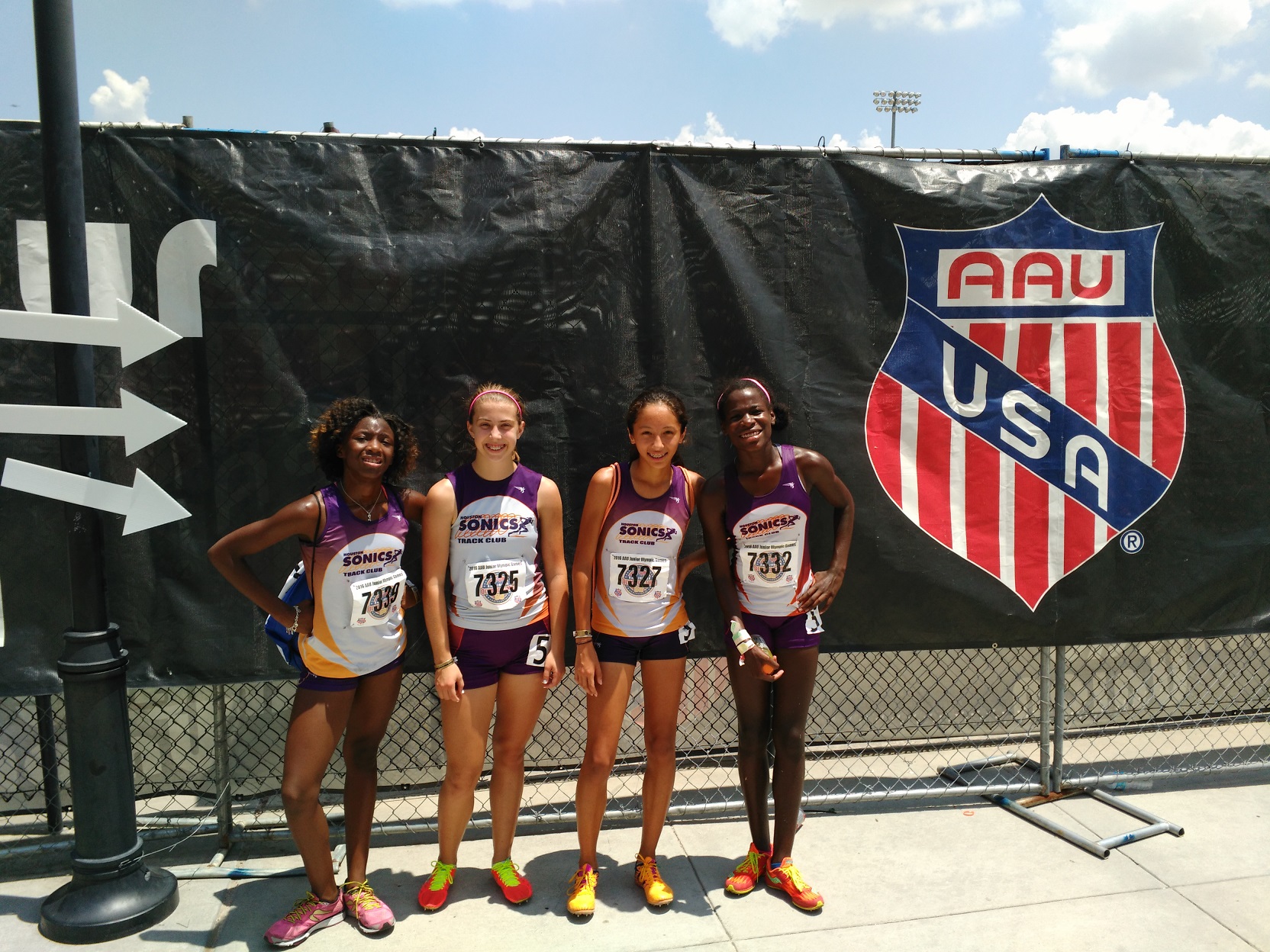 Sonics medal #4 of the Junior Olympics was a bit unexpected and came early in the day from Jaiden Anderson in the 12 Girls Turbo Javelin. Despite not being seeded among the top 20 competitors, Jaiden made a huge improvement on her personal best with a throw of 75′ 0″ which was good enough for an 8th place finish! Amelia Olowu, Connor Parker, Todd Woods, and Michelle Mayer all competed in the 800 meters, Kennedy Burgess in the shot put and Kenneth Burgess in the turbo javelin and shot put, but none managed to reach the medal podium. Finally, the 11-12 girls had a solid showing in the 4×400 relay, but did not advance. 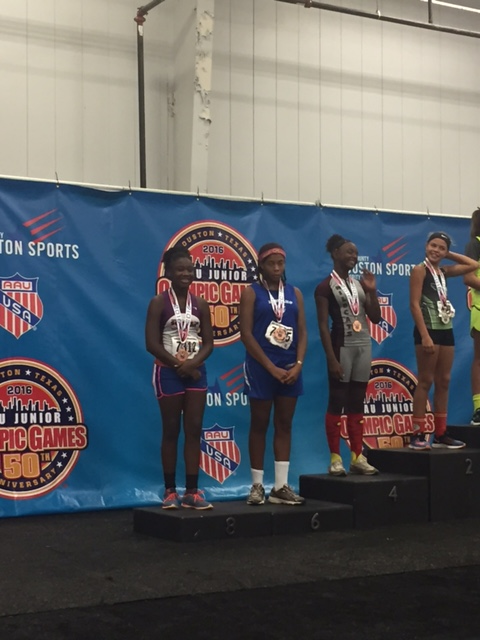 Tuesday got off to a bang early with two more Sonics medalists. Michelle Mayer took 5th place finish in the 14 Girls 1500 meter run and then Octavia Gee followed it up with her second gold medal of the meet by winning the 10 Girls Shot Put. This is her third consecutive year of winning this event. The Sonics medal count for the meet now stands at three. The Sonics were well represented in the 200 meter dash with Ryann Dedmon, Daniel Mitchell, Kylah Woods, Olivia Nicholas, and Hannah Nicholas, and in the 400 meter dash by Ryann Dedmon, Kylah Woods, Connor Parker, Todd Woods, and Nylah Raspberry. Unfortunately, none of them managed to advance in those events. Also competing in the field events were Kenneth Burgess in the Turbo Javelin, Alex Ewing in the Discus, and Anthony Chatman who had a strong 10th place showing in the 11 Boys Shot Put. 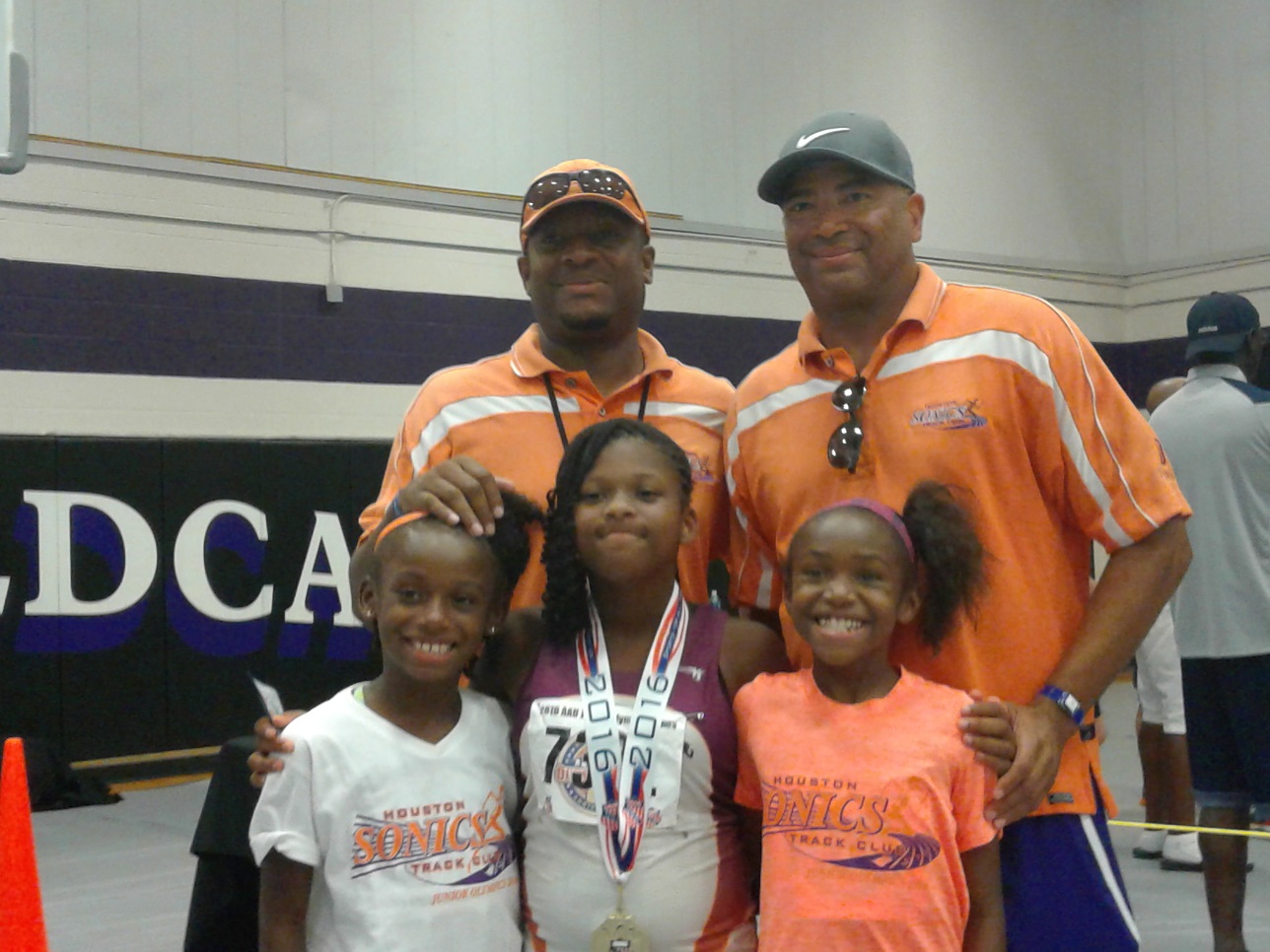 Sonics only had four athletes competing today. Michelle Mayer finished 9th overall in the 14 Girls 800 meter prelims and will advance to the finals to be held on Wednesday. Mikayla Courville ran a season’s best time in the 15-16 Girls 400 meter hurdles, but did not qualify for the finals. Haley Bullington and Olivia Nicholas competed in the 15-16 Girls and 10 Girls high jump, respectively, but neither made it to the medal podium. Tomorrow will be a much busier day for the Sonics as 14 of our athletes will be competing. 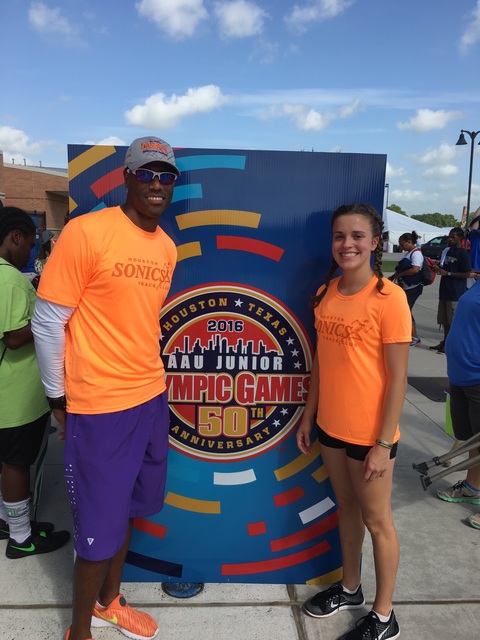 No Sonics athletes competed on Day 1, but Day 2 got off to a fantastic start with Octavia Gee taking the gold in the 10 Girls Triathlon! Her winning point total of 1176 was more than 100 points clear of the second place finisher. Let’s keep the momentum heading into week, Sonics! 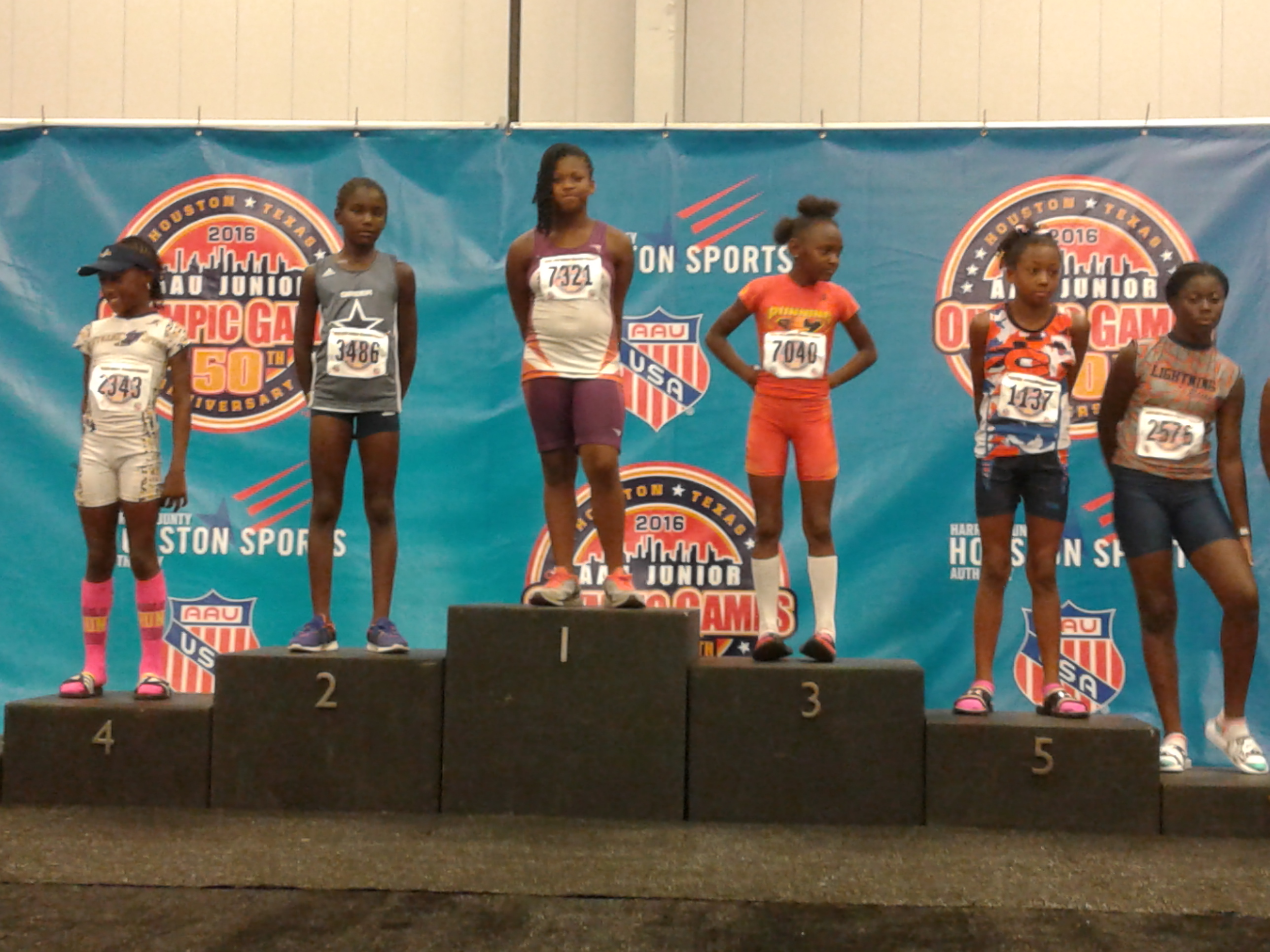